A few weeks back, I was lucky enough to make a trip down to Apple Annie’s Orchard in Willcox, AZ. I’ve been several times in the past to pick my own pumpkins in the fall, but I had always missed out on picking peaches from their orchard in the summertime. I was super excited to go! 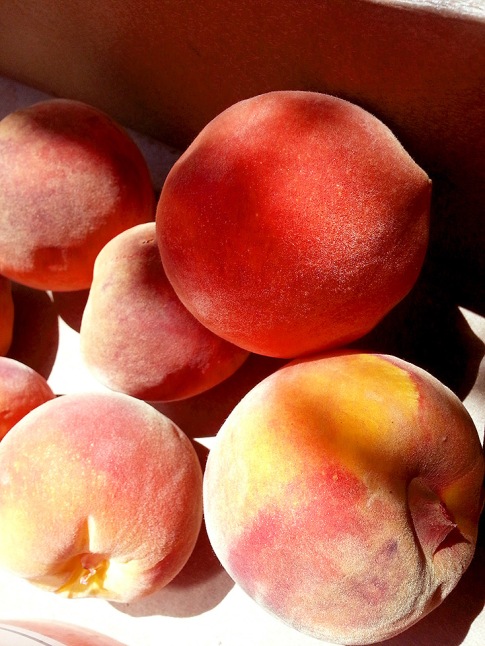 There’s nothing like walking through a peach orchard on a summer morning. I knew it would be beautiful, but the thing I didn’t expect was how good it would smell!! The fragrance of peaches magnified by the morning sun was amazing. Have you ever eaten a fresh, ripe peach right from the tree you just picked it from? I hadn’t before. I think as a society, we’ve mostly become so disconnected from where our food comes from (unless you’re lucky enough to shop at a farmstand or a true farmers market). It was very foreign but so nice to be able to stand in the sunlight and pick my own fruit from the trees in a local orchard. If you’ve never done it before, I highly recommend it if you have the chance. Much better than being bathed in garish fluorescent lights while filling a plastic bag of sub-par produce at the grocery store. 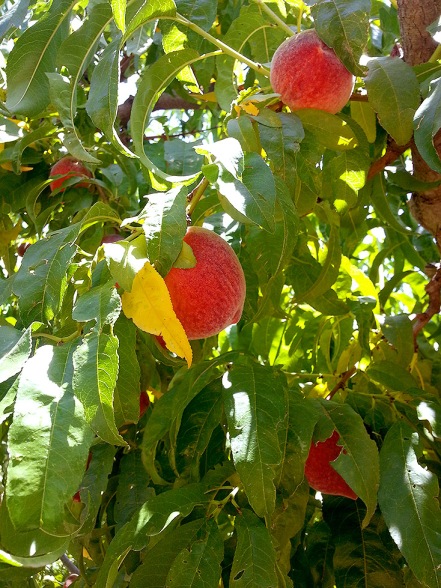 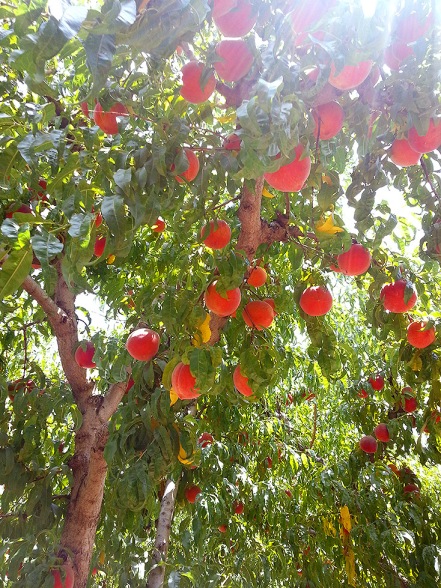 Bringing home several pounds of fresh peaches is a little daunting, but it’s a fun challenge to decide what to do with them. I have a few ideas in my head for the peaches I still have, but the first thought that came to mind was to turn these awesome peaches into a peach crisp. Maybe with a little complementary almonds and honey? I think that’ll do just fine.

4 lbs. fresh or frozen peaches, sliced (skin on if you want!)

[edit: this recipe can easily be halved if you don’t want a giant pan of peach crisp, or you can even divide it into smaller containers and make single-serving versions! Or, prepare the crisp as directed, but use disposable foil pans and freeze them before baking. That way, you can have fresh-baked peach crisp anytime of the year! Just adjust the bake time to account for baking the crisp from frozen]

Start out by preheating your oven to 375 degrees, and lightly greasing a 9″x13″ baking dish. Set the dish aside while you prep your peaches!

When I got my freshly picked peaches home, I sliced them and froze them in gallon sized freezer bags cause I wasn’t sure when I would have time to use them. If you have fresh peaches, you can totally use them fresh, but if all you have are frozen peaches, be sure to defrost them fully before making your crisp. If your defrosted peaches have a lot of juice, drain them so they’re not so full of liquid. In a small bowl, mix together your cornstarch and the 1/2 teaspoon of cinnamon, and toss this with your defrosted (or fresh) peaches in a large bowl. Pour the coated peaches into your greased dish and get crackin’ on the topping! 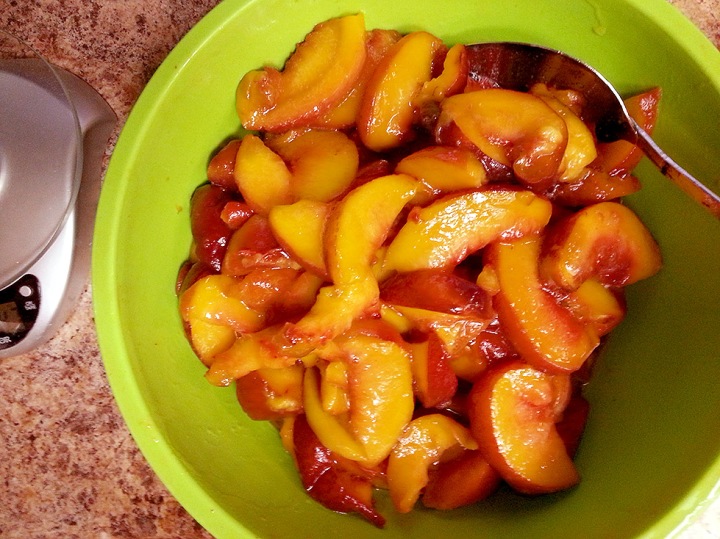 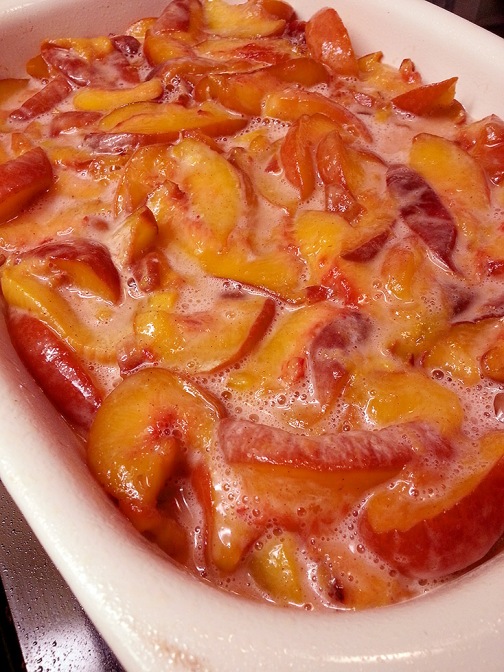 In a medium sized bowl, stir together your oats, flour, brown and white sugars, salt, cinnamon, vanilla and almond extracts, and your chopped almonds. On top of that, pile your cold butter chunks and honey. Using your hands, work the butter chunks and honey into the crumble mixture as if you were making a biscuit dough or pie dough. Try to break down the cold butter so there are no large chunks remaining. When the crumble topping is ready, it should be uniformly damp and clump together when squeezed in your hand. 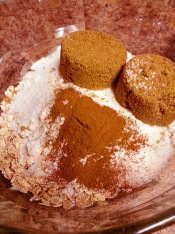 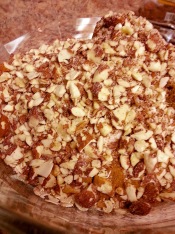 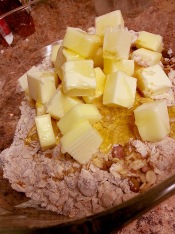 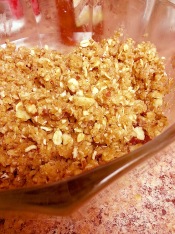 Sprinkle the prepped peaches with the crumble topping, making an even layer with no peaches exposed. When the peaches are all covered, place the baking dish on a rack in the center of your oven and bake for 50 minutes, After 50 minutes, the fruit should be bubbling all over, and some of the peach juice should have bubbled up over some of the topping. The topping will be golden brown. Notice how good your house smells now? 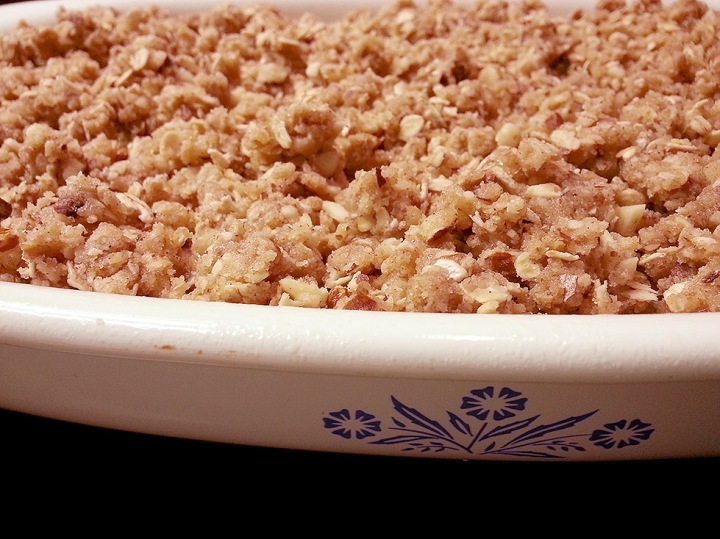 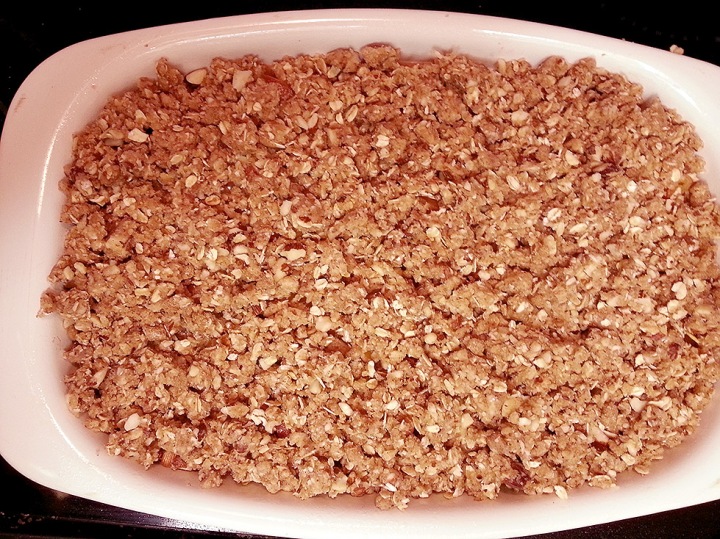 When the crisp is done, let it cool on a rack until it’s slightly cooler and not scald-your-mouth hot. It’s great served warm right from the oven, but it also reheats beautifully in the microwave. Leftovers can be kept in the pan covered with plastic wrap and stored in the fridge for up to a week. 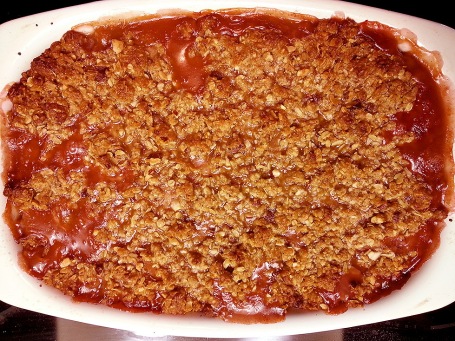 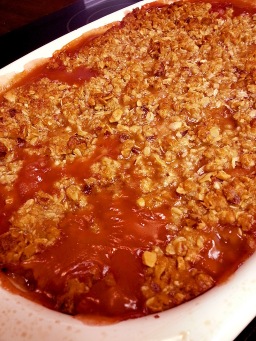 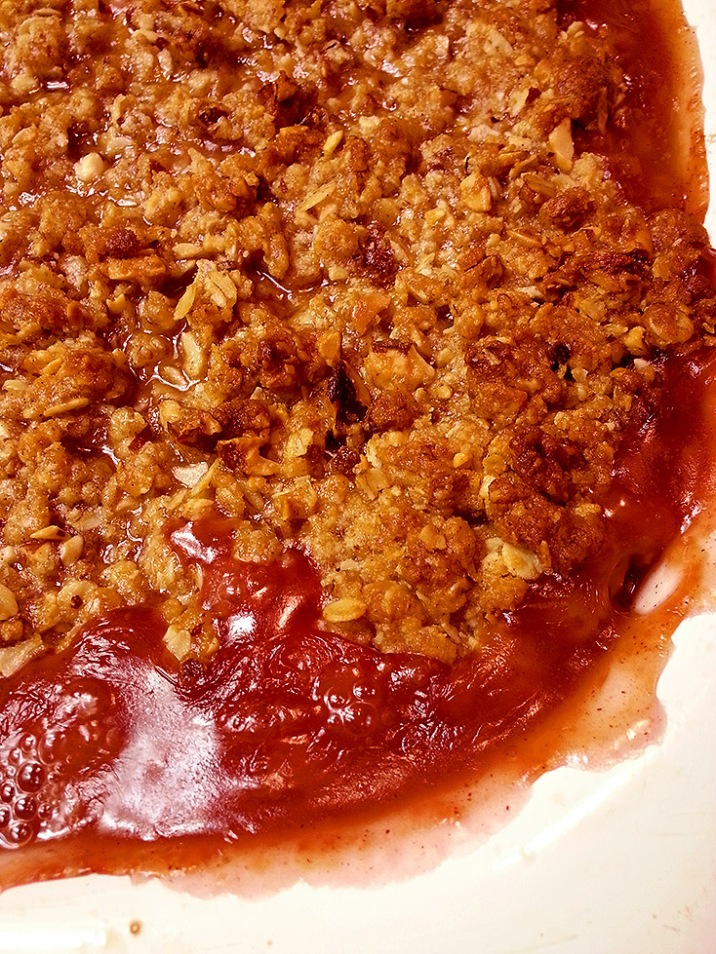 I don’t think you can get much more homemade than this. From picking the fresh peaches by hand on a gorgeous summer day, to mixing up the oaty almond-filled crumble topping, and baking this gorgeous crisp, there’s just nothing better. Serve it up with a few scoops of vanilla ice cream, and it’s like a bowl of summer. The great thing about this crisp is that it’s not hit-you-over-the-head sweet. The peaches shine on their own, and the crumble topping is just sweet enough to bring out the natural sugars in the fruit. Feel free to whip up a pan of this peach crisp in the dead of winter with the fresh peaches that you sliced and froze back in the heat of the summer. You may just catch a glimpse of the sun shining through peach trees that are weighed down with fruit, ripe for the picking. Enjoy it! 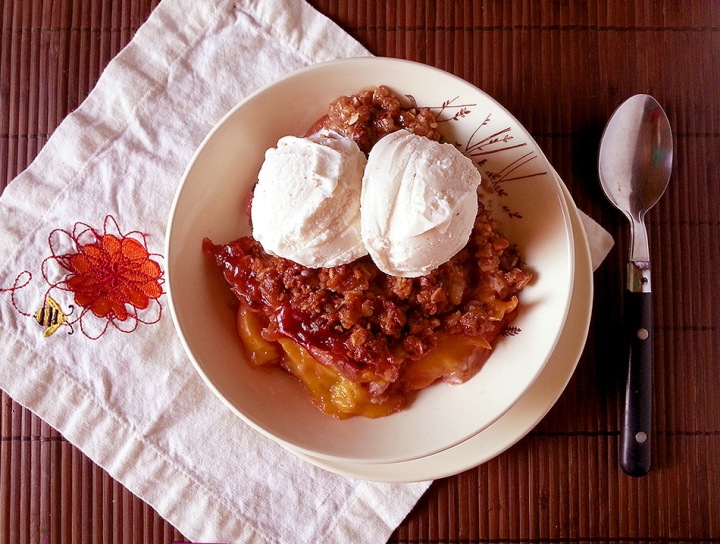 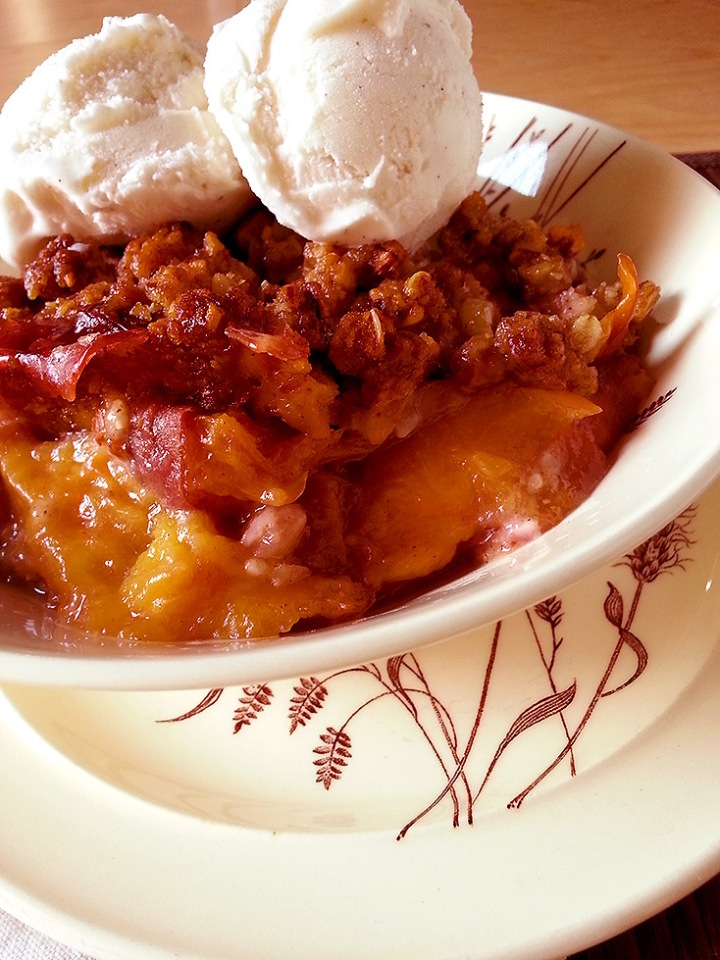 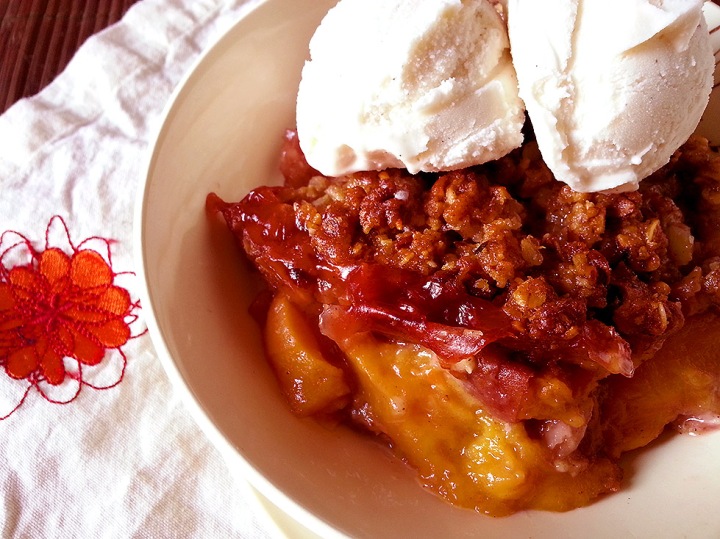 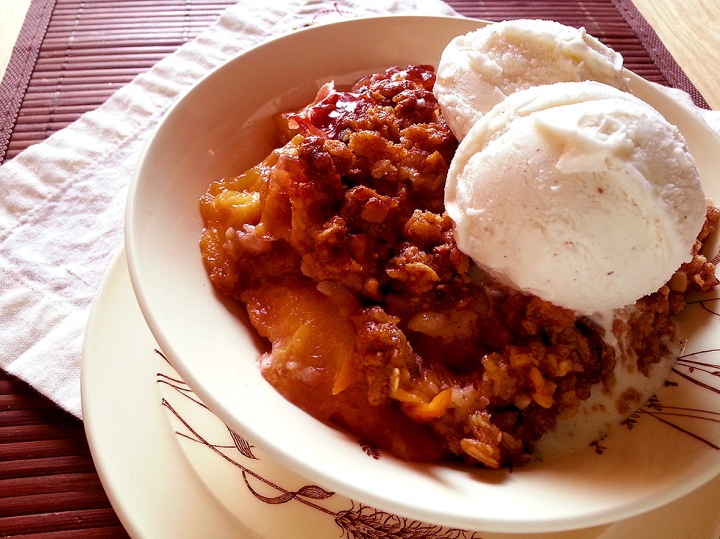 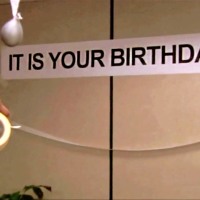 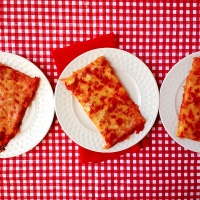 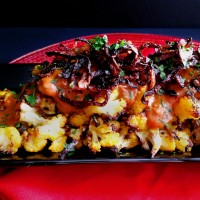 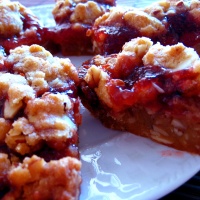 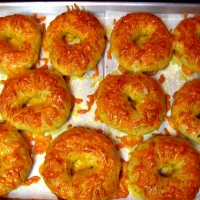 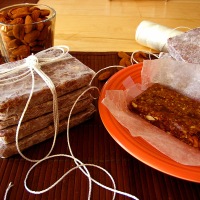