Back last fall, Deb over at smitten kitchen posted a recipe for a crispy fried egg. Usually, fried eggs are my last choice when it comes to egg preparation methods. Runny yolk? Ew.

However, the crispy egg was intriguing to me. I wanted to make it for myself, but wasn’t sure how to let it shine in the best possible way. A breakfast pizza seemed like the logical conclusion — and really, who wouldn’t want to eat pizza for breakfast, especially when it’s covered with bacon, peppers and onions, crispy hash browns, and crowned with this gloriously crispy fried egg?

(makes 2 – 10 inch pizzas; egg preparation thanks to this recipe)

Allow the pizza dough to rise in an oiled bowl, covered, for an hour or so until the dough has doubled in size. Preheat the oven to 550 degrees.

In a 10 inch microwave safe pie plate, scatter the chopped raw bacon. Microwave on high, covered with a paper towel, 5 minutes. Stir, cook an additional 6 minutes until cooked and beginning to brown. Time may vary based on your microwave. Scoop bacon out and place on a paper towel-covered plate to drain. 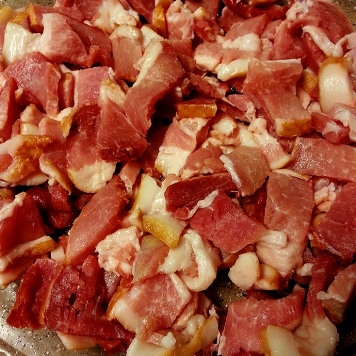 Heat the 2 tablespoons of olive oil in a skillet over medium-high heat. Once hot, add the hash brown pieces and cook, stirring occasionally, until crispy and browned. Set aside.

Thinly slice the red onion and the green pepper and set aside. 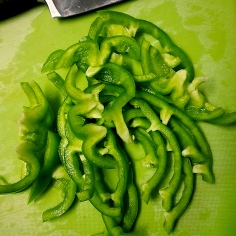 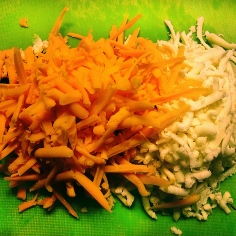 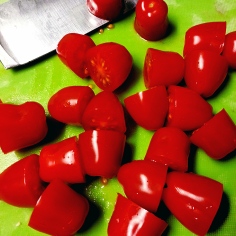 Once the pizza dough has risen, punch it down to deflate, and divide the dough in half. On a floured pizza peel or a large round pizza pan, press and stretch one half until it measures 10 inches across. Mix together the two cheeses and divide in half. Scatter a small handful of half the cheese over the top of the dough. Sprinkle on half of the bacon, followed by half the onion and peppers. Scatter on the remaining half of the cheese, and top with half the cooked hash browns. 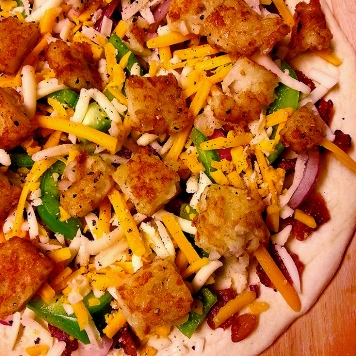 Slide the pizza from the peel on to a large pizza pan, or just place the pizza on its pan into the preheated oven. Bake the first pizza for about 10 minutes on the lower rack of the oven, until the cheese is bubbling and turning brown in spots, and the crust is golden brown and crispy. Continue to assemble the second pizza same as the first, and bake once the first pizza has come out of the oven.

While the pizzas rest a bit, heat the 1/3 cup of oil on high heat in the same skillet you cooked the hash browns in. Once the oil is very hot, crack one egg directly into the pan. The egg white will immediately start to bubble and sputter, and eventually the edges of the egg will become dark golden brown. Carefully lift out the crispy egg with a spatula and place it in the center of one pizza. Repeat this process with the second egg, and top the second pizza with its egg.

Sprinkle each pizza with half of the sliced tomatoes and the chopped green onion, adding some fresh black pepper for good measure. Slice it up and scarf it down!

I admit, up until I took my first bite, I was still a little wary of the fried egg. It is actually amazing! When the pizza is cut, the yolk spreads itself on the top of the pizza, essentially creating a “sauce”. The salty bacon, lightly cooked veggies, crunchy hash browns, gooey cheese, and fresh tomatoes and green onions all combine with the egg and the perfectly cooked pizza crust to form what may be the most comprehensive and delicious breakfast I’ve eaten in quite some time. I hope you feel the same! If you wish to  make smaller pizzas, divide the dough into 4 pieces instead of two, and divide the other ingredients up accordingly per pizza. Fry up a few more crispy eggs, and you have 4 smaller portions of the best damn breakfast pizza you’ll ever make.